Bahrain is best known for its pearl fisheries and oil reservoir but have you taken the time to explore what else this beautiful country has to offer?

Bahrain offers many things for visitors and residents to do with its wealth of quaint places to visit and even a couple of UNESCO World Heritage Sites to explore. If you are looking for a day of adventure and exploration, then we recommend these destinations:

With some of the landscape spanning back to third millennium BC, this is the largest prehistoric cemetery in the world. As you stroll around, you will be able to see different styles and sizes as they have evolved over time. It is recommended to visit this site along with the Bahrain National Museum for more information about the sight and to understand the significance of this archaeological site.

Built in 1984 with marble from Italy, teak wood from India and glass from Australia, the Al Fateh Grand Mosque is one of the biggest mosques in the world. The mosque can not only accommodate up to 7000 worshippers but also has the largest fibreglass dome in the world. It has also become home to the National Library of Bahrain. 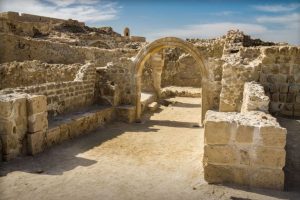 Previously the capital of the Dilmun civilization and more frequently a Portuguese fort, the Bahrain Fort is one of the most important historic political and military forts in the GCC region. It is located atop a 17.5 hectare artificial hill that has been built while enduring over 4,000 years of continuous occupation.

The fort boasts with 5 exhibition halls and over 500 artefacts being showcased and is also registered as a UNESCO World Heritage Site.

4. The Pearl Trail in Muharraq

Be transferred back in time as you walk through the streets of Al Muharraq and explore the buildings in Muharraq, 3 oyster beds and the seafront Bu Mahir fortress. The Pearl Trail in Muharraq is Bahrain’s second official UNESCO World Heritage Site. It is a relatively short trail of 3.5 km can keep you busy for 3 or 4 hours as you explore all the alley ways and old buildings along the way. The buildings include the homes of wealthy merchants, shops, storehouses and a mosque.

We recommend starting early when visiting the pearl trail as most of the buildings are only open in the mornings.

A treasure trove of 6000 year’s history of Bahrain, this is a must visit museum if you are interested in history or would like to know more about Bahrain. The museum has approximately 20,000 square metres of floor space with a permanent exhibition area, temporary exhibition halls, art gallery, lecture hall, gift shop and café.

Halls featured at the museum are the Hall of Graves, Dilmun, Tylos and Islam, Customs and Traditions, Traditional Trades and Crafts, and Documents and Manuscripts.

If you are looking for sun, sand and a bit of adventure, then Hawar Islands is the place to go. Part of an archipelago of desert islands, it is situated off the west coast of Qatar in the Gulf of Bahrain of the Persian Gulf.

The island is especially popular for birdwatchers and divers with its unique environment and habitat for endangered species. It used to be one of the settlements of the Bahraini. In 1820, two villages were recorded when the island was first surveyed but these have since become uninhabited.

The Al Areen Wildlife Park & Reserve is one of seven protected areas in Bahrain and home to 45 mammal species and 82 different bird species. Established in 1976, the 7 square kilometres park aims to preserve Arabian endangered wildlife and has numerous breeding programs in order to help achieve this objective. Only the park section of Al Areen Wildlife Park & Reserve is open to the public as the rest of the reserve is being used for conservation, preservation and breeding of rare Arabian animals.

Initiated by the Crown Prince, Shaikh Salman bin Hamad Al Khalifa, the track was initially built for the 2004 Bahrain Grand Prix. Although the track wasn’t completely finished in time for the Grand Prix, it was good enough to continue with the event. In 2005 the track was realigned and the overall length of the circuit was decreased by 5 metres.

2007 marked the year during which the track became the first Grand Prix circuit to be awarded the distinguished FIA Institute Centre of Excellence award. The award was given based on the grounds of excellent safety, race marshals’ and medical facilities.

The track offers numerous activities such as driving experiences, open track days for cars and motorcycles, drag racing and more. This is the perfect outing for any car enthusiast!

If you are a history fanatic then you definitely need to make a stop at the Barbar Temples! This archaeological site features three temples that are built on top of one another to worship the god of wisdom and freshwater, Enki, and his wife Nankhur Sak. Each temple was built a couple of hundred years after the other and are considered to be part of the Dilmun culture. They are located in the village of Barbar and won’t be a very time-consuming trip, but it is worth the effort of seeing it at least once.

Reef Island is your go-to destination if you are looking for a place to spoil yourself and relax in luxury. It is aman-made island that is situated 2 km north of downtown Manama. The island features a five star hotel resort, waterfront apartments, yacht club, boutique retail, villas, spa hotel, lagoon apartments, a thirty floors apartment tower, marine retail, theatre/ exhibition halls and a marina.

Although some of the locals see the tree as a bit of a joke, it is still interesting to see. The Prosopis cineraria tree is approximately 400-years old and some describe it as an allegory for the survival for one of the world’s smallest states. Pottery and other artefacts have been unearthed in the vicinity of this tourist destination and are currently on display in the visitor’s centre.